I have recently become fascinated by the world of fungi, the study of which is called “mycology”.  I found some pretty mushrooms while walking through the woods, took a few shots and then tried to identify them.  That was it, my world was changed forever.  I now walk with my head down, peering into the damp forest underbrush, hoping to find elusive toothed fungi like Hericium coralloides - the Comb Tooth fungi or Hericium americanum with beautiful white cascading  hanging spines.


Did you know, that fungi are organisms that are made up of networks of tiny, microscopic “threads” which spread themselves throughout the soil?  The individual threads are known as “hypha” and an entire network of hypha is called a “mycelium”.


The mycelium lives in the ground throughout the year, but when the conditions are right, the fungus will want to “bloom” in order to produce and disperse spores to produce new fungi.  The mushrooms we typically see coming out of the ground or growing from rotting timber are actually the fungi “blooming”.  We call these visible spore producing structures “fruiting bodies” or “sporocarps”.

Little knots of hyphae begin to form under the ground and then grow into two parts:  the mushroom’s cap and the stem.  When the knots, called “primoridia” get large enough, the stem and cap get pushed above the ground and become visible to us.


Fruiting bodies grow in a wide variety of shapes, sizes and colours.  Some are quite ugly like the dark “Devil’s Urn” which is 12 cm tall and goblet-shaped, or the cute “Lemon Drops” which are small, bright, yellow 3 mm droplets.  There are some that look like orange peels, and the beautiful Amanita Muscaria with its red cap and white speckles.  Some even look like underwater coral!


While the mycelium remains under the ground all year, the visible mushroom portions live for only a short while.  A single mycelium can produce many mushrooms.


Did you know, that fungi cannot manufacture their own food by means of photosynthesis and that they secrete an enzyme in order to digest parts of their surroundings?  Spores are produced on the “gills” that are typically under the “cap” of the mushroom.  A mushroom will grow tall on its stalk in order to raise its cap higher than its surroundings.  When the spores are released, they fall to the ground and are carried by breezes in the air.  The higher the cap, the further the spores can be dispersed. 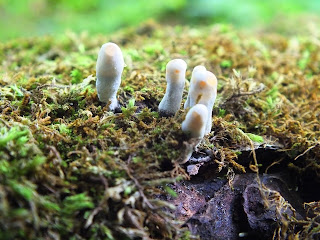 Identification – With photos in hand, I began to leaf through mushroom identification books and Googled images for comparison, trying to put names to the specimens I'd found. What I found, however, was a whole new world and that proper identification by sight alone is impossible!  Two mushrooms may appear exactly alike with only very slight differences.  One may have a slight indentation in its cap that you may not notice.  The Lactarius and Russula genera are difficult to identify for even the expert fungus enthusiast.  Unlike the Russula, Lactarius mushrooms “bleed” a latex-like fluid.  While looking identical, one may emit a white latex from its gills while the other does not.  Some species look exactly alike except for the colour or pattern of their spores – identified by doing something called taking a spore print.


I next learned that fungi can be grouped as Sac fungi, Earthballs, Puffballs, Jelly fungi, Stinkhorns, Morels, Corals, Toothed fungi, Brackets, and Boletes.  Spore prints may be pink, brown or light.  Herein I need to mention that there are also slime moulds (Myxomycota) and lichen… but that’s a topic for another day.


Making a spore print with your students is a great tactile addition to your fungus lesson plan.  You will need:
- fresh mushrooms – picked from the field, not the grocery store;
- a clear sheet of plastic;
- some type of covering – perhaps a bowl or glass.


Cut or pull off the stalk of the mushroom; place the cap on the sheet of clear plastic with the cap facing down; cover over night with a bowl.  If the mushroom is small, a cup or glass will do as well - I used plastic drinking glasses with my students.
By the morning, the cap will have released its spores onto the plastic and you will see a colour and pattern.  A white sheet of paper works well too, unless your mushroom specimen happens to drop very light spores in which case you will be disappointed thinking you are seeing nothing and will assume this exercise didn't work. Unless you know ahead what colour spores your mushroom will drop, use clear plastic. 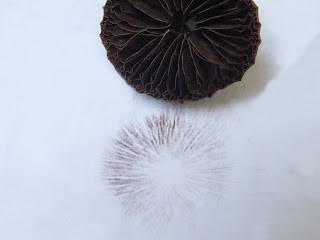 Note:  A mushroom will drop spores without the bowl being placed upon it, the bowl merely speeds up the process.


You need to explain to your class that a mushroom’s spores are microscopic and that normally you would not be able to see them.  You can see the pattern and colour of the spores since the mushroom is releasing millions of them!

Note:  There are many toxic mushroom “look-alikes” that resemble edible ones.  You should under no circumstances rely upon my identification of species.  I am not a mycologist and have not done microscopic identification - I have added names to images which I merely THINK resemble the species.  Some mushrooms and fungi are DEADLY poisonous and their effects do not show up until it is too late to save yourself.
Resources for your fungi lessons:
Free downloadable images of fungi, slimes & lichens from FreeTiiuPix
All you want to know about mushrooms from mushroomexpert.com
Mushrooms of Quebec (Use translate if you can't read French)
Identifying the shape of mushroom caps (Wikipedia)
Visual identification keys at rogersmushrooms.com