While photographing lichens in , a fuzzy brown patch upon the bark of a cedar tree caught my attention.  I thought I had come upon the nest of a spider.

The fuzzy brown material I assumed was chewed pulp – quite possibly a nest made of chewed tree fibres, constructed much the same way that hornets chew plant materials for form their papery homes.  But the bark around the fuzzy patch was intact – from where had the spider gotten the material from which to build its nest?  I began to take note that a great many trees had similar patches on their trunks and I even found some patches on cement posts.  This was no spider nest!

Thanks to the research of a Park naturalist at Grundy Lake Provincial Park in Northern Ontario, I learned that what I’d discovered was actually the egg mass of the Gypsy Moth [Lymantria dispar L.], also known as the European or North American Gypsy Moth.  According to the Ontario Hamilton Conservation Authority, the larvae of this species consumes the leaves of over 500 species of both deciduous and coniferous trees, shrubs and plants.  The starving larva move from tree to tree and are transported by wind currents.

The Gypsy Moth was accidentally introduced to around 1868 in a failed attempt at starting a silk industry.  It first evolved in Europe and .  The US Forest Service calls them one of ’s most devastating forest pests.  The Park was grateful for my discovery and concerned as to whether or not they had an epidemic on their hands.

So what does a Gypsy Moth look like?  Adult males are a light brown and grey colour with a darker brown mottled pattern on their wings. The male has feathery brown antennae and a wingspan of just under 2 inches.  Females are slightly larger (2.5 inches) and are almost completely white in colour having a few dark-coloured stripes across her wings.  She has a light-coloured fuzzy head and has a few dark markings on her wings.  Females are flightless.
Reproducing once a year, females usually lay egg masses from late June through August on tree trucks, but have also been known to lay eggs on rocks, etc.  Each beige coloured egg mass that is about 304 cm long and 102 cm wide, contains about 100 – 1,500 eggs.  As the female lays the eggs, she covers them with hair that she pulls from her abdomen.  Protected by the warmth of the female’s hairs, the eggs remain in their mass over the winter and hatch in the late spring or early summer. The hair mixture also provides protection from predators.  A hatched egg mass is lighter in colour and has tiny exit holes on the surface.  The eggs will no longer be felt inside.
﻿


As they hatch from their tiny, dark-coloured eggs, the larva are about 3 mm in size, but will grow to be about 50 to 90 mm. The larvae go through several developmental stages and pupate in the late summer.  Males emerge first and begin to search for females.  After mating, both adults die.
Since my discovery, I have now further learned that adult Gypsy Moths only live about a week since they do not have an active digestive system.  While they can drink moisture, they cannot eat.
This species of Moth is particularly destructive because it causes havoc in a number of ways. Did you know, that one Gypsy Moth caterpillar can eat about one square meter of foliage?  Multiply that with an infestation and entire forests can be stripped of their leaves.  Defoliation causes a tree stress and weakens it.  After about two years, the tree can no longer produce its own energy and may die.  Many mature trees can be lost in this way.
What about the nuisance of something called caterpillar "frass"?  With the large amount of eating that they do, caterpillars also produce a lot of fecal matter, or "poop" called "frass".  In a large infestation, frass has been known to cover backyards, outdoor furniture, etc. decreasing a homeowner's enjoyment and use of their land.


How do you get rid of the Gypsy Moth?
Hand picking the egg masses and spraying is done in an effort to rid an area of these pests.  While scraping egg masses off infested trees and the removal of caterpillars and pheromone traps work to some degree, often a biological pesticide called Bacillus thuringiensis kurstaki (Btk) is sprayed over large areas.  Made of a dormant bacteria that is toxic to Gypsy Moth caterpillars, this pesticide affects only this species and, although costly since it needs to be sprayed from the air, is very effective. 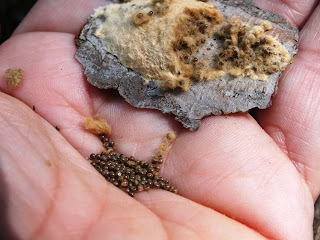 While taking photographs, I touched an egg mass quite a bit as I examined and rubbed off some hairs and vigorously rolled the eggs in my palms to reveal the black spheres.  After the fact, I’ve now learned that the fuzzy hairs that protect the egg mass can cause a serious rash if touched by bare skin.   Perhaps since it was spring, the potency of the irritant had decreased over the winter months, but luckily I did not experience any irritation or rash.  My advice should you find a Gypsy Moth egg mass, is that you not touch it for you may not be as lucky.


Introducing students to the Gypsy Moth works well with ’s Elementary curriculum.  Teachers can stress how plants and animals are interdependent and are adapted to meet their needs from the resources available in their particular habitats.  Have students think about how might deforestation caused by the Gypsy Moth impact on the lives of other animals?  the forest?  the lumber industry?  recreation?
Your discussion should progress to students getting an understanding of a community as a group of interacting species that share a common habitat.  How are communities affected by this moth?  What about a community dependent upon timber as their source of income?
Download these and other images of Gypsy Moths from  FreeTiiuPix.com.  Check out the Insect Category where you can download free clip art to share what the male and female Gypsy Moth look like.
Further info: